For the next few days of this year’s French Open, the following are my predictions!

Firstly, have a look at the draw for the Last remaining 8 players: 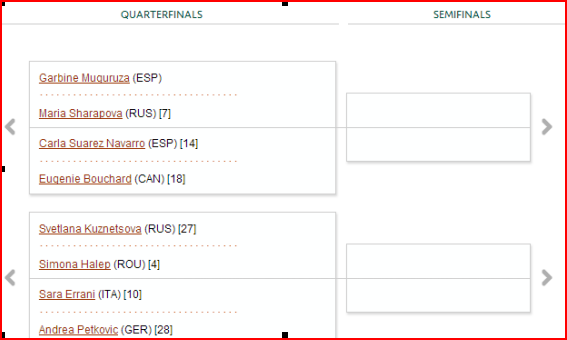 I am hugely impressed by the sheer determination of Errani (former finalist) shown at this year’s French Open. Petkovic has been rather inconsistent and was lucky to get through Bertens today. Overall, my money is on Errani here!

I have been quoting Halep as the most improved player for sometime now and what a show she’s been putting on. She is playing very solid tennis and doesn’t show any fatigue concerns.

Kuznetsova has played some really good tennis so far but was rather on and off against Kvitova. However, if there is anything she has, it’s her experience here at Paris being crowned a champion before.

A not so easy one to call, but I’m sticking to the emerging star in Halep!

Both have played really good tennis so far. Bouchard really is living up to the hype as the next big thing and has a decent chance here. Navarro on the other hand has immense experience on clay and looked pretty good against Tomljanovic who had knocked out Radwanska in 2 sets.

Eventhough Bouchard is the favourite here, I am inclining towards Navarro to come through in a possible thrilling three setter!

Maria blew away Stosur after being in some sort of trouble in her last match. Prior to that though, she had no trouble handling her opponents. However, the real big star for me in this whole tournament has been Garbine Muguruza. Remember this name ladies and gents, this girl could make a major impact in the coming years in the WTA circuit!

I have been impressed in every department of Garbine’s play. She’s got decent serves, plays very aggressively and her returns are spot on with some brutal power in all directions. At first, I had imagined Serena’s loss was more due to the champion playing badly. But analysing the match further, I’ve come to the conclusion that Muguruza played Serena like no one had challenged her in a long long time.

Assuming I’m right on all 4 (hoping to get at least 3 right 😉 ) here’s how the semi-finals would play out: 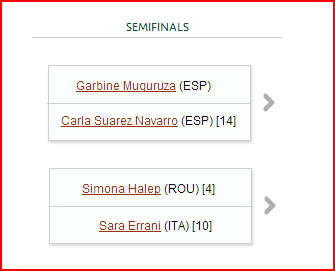 If indeed I happen to be right on Muguruza knocking out Maria, then this would most likely be a walk in the park. What I think Muguruza has and Navarro hasn’t, is sheer power.

I really think Halep will put a good performance here but I feel the experience and knowledge of this court should go to Errani more. I’m fancying a cracking match and a very likely 3 setter in Sara Errani’s favour. Possibly one of the matches of the tournament here in relation to trading!

Assuming this does happen, I think Muguruza will emerge victorious for the reason that her serves are the more consistent ones. Errani has relied on her rallies more than her serve. However, that alone isn’t going to be enough against this new finalist. Garbine has some amazing power and that is going to be unleashed throughout this match on the Italian who is likely to succumb in a very one-sided final.

Hence, lads and lassies, Garbine Muguruza to win this year’s Women’s French Open Title for me. But then, first thing’s first, she has to make my bold prediction come true by knocking out the favourite Maria Sharapova!

The Draw for the last 8 as follows:

Let me just predict that Djokovic will reach this year’s final. I’ll leave it at that!

Normally I’d say Nadal to win at the French rather easily very confidently but I really think that there could be an upset on the cards here. However, with all his experience, Nadal is never easy to beat so going for him possibly in a 4 set win!

A mouthwatering match that could include a lot of fun and craziness! I’ve to say Murray is playing probably the best tennis on Clay I’ve ever seen him play so have to fancy him to knock out the last remaining Frenchman.

A great match in prospect here as Gulbis was always the one to watch prior to this tournament starting. He has proven why he’s no easy opponent by knocking out Roger in the last match. I think he may have just enough left in the tank to knock out Tomas Berdych who is going to be a stiff challenge.

The Last 4 Draw would look as follows if all my predictions came true:

Djokovic to reach the final. Simple as that!

As well as Murray has played here, I don’t think he has the stamina or the fitness levels to take out Rafa in a 5 setter! If he is to beat Nadal, he must do it as quick as possible, possibly in 3 sets, an almost impossible task. Anything more, he is going to suffer greatly!

Nadal to win this great duel!

These both have been close favourites throughout this French Open. I am expecting a great finale here. For me Djokovic had given his best at the previous two French Opens. In 2012, the rain was a big turning point in the match which Rafa won in 4 sets. In 2013, after fighting back in the third set, Novak took this to a deciding set where he was up a break. Somehow Nadal prevailed then. All those missed opportunities have made Novak believe more in his abilities and he is looking dangerous and more importantly the only one who can take away Rafael Nadal’s unending dominance on clay. Indeed that is what I predict awaits us this time around.

As much as I admire Rafa for the great champion he is, I believe Novak Djokovic will beat him this time around!

Thanks for reading everyone and Good luck! 🙂