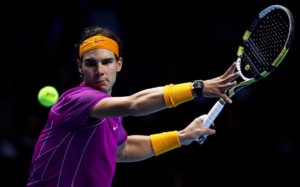 ATP World Tour Finals: Preview
As the curtains come down on another ATP season at the O2 Arena in London, there is still plenty of excitement among the fans. With the draw being made on Wednesday morning, we look forward to the eight men eying the final trophy of calendar year.
Pete Sampras Group
Prior to the draw, there was a fear among fans that Rafael Nadal might pull out from the tournament for the sixth time in his career. His withdrawal from the Paris Masters last week added fuel to the speculation. However, all the assumptions have been laid to rest as the world no. 1 was included in the Pete Sampras Group. Having won the French Open, US Open along with the Masters in Monte Carlo and Madrid and ATP 500’s in Barcelona and Beijing, Nadal will be looking forward to add another championship to his burgeoning trophy cabinet. The Spaniard is 10/11 favourite clinch the group.
Keeping him company in the group is world no. 4 Dominic Thiem, appearing in the season finale for only the second time in his career. The Austrian has had a good season, clinching a title in Rio de Janeiro and a final appearance in Madrid. His odds of making to the knockout are 11/2.
Having the same odds is world no. 7 David Goffin. The Belgian appeared at the tournament last year as a replacement for Gael Monfils. Completing the group is Bulgarian debutant and world no. 6 Grigor Dimitrov, who has claimed three titles this year including the Masters 1000 in Cincinnati. Surprisingly he is 5/2 favorite to come out of the group, above Goffin and Thiem.
Boris Becker Group
Six time tournament champion and world no. 2, Roger Federer leads the charts to top the group with 2/5 odds. Along with the Wimbledon and Australian Open, the Swiss maestro has also bagged the three Masters 1000s in Indian Wells, Miami and Shanghai. The absence of bogey opponent Novak Djokovic and the injury issue of Nadal have certainly made Federer the firm favourite to clinch the ATP World Tour Finals.
Challenging Federer in the group will be world no. 3 Alexander Zverev, touted as the successor to the big four by many. Having won two Masters 1000s in Rome and Montreal, the German will be looking forward to reach the semifinals with 9/2 odds.
Completing the group are Croatia’s Marin Cilic and USA’s Jack Sock. While Cilic has had a disappointing year, Sock is the group’s dark horse and will be looking for a surprise result. Cilic is 6/1 favourite to reach the knock outs while Sock has a 11/1 odd on his name.
Prediction

While Nadal has had an exceptional year, Federer is the safest bet for the man lifting the trophy on November 19, 2017. When it comes to hard court, The Swiss is certainly miles ahead of his competitors. Again, with injuries hampering Nadal’s progress and the absence of Djokovic and Murray will certainly make Federer the favourite for the season finale.