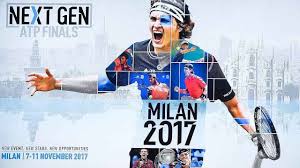 The first Next Gen ATP Finals tournament is ready to begin on the 7th of November 2017 in Milan, Itay. It will be a whole new concept for the tennis world, as unusual innovative rules (which haven’t been seen before) will be used.

The contenders will be the eight best singles players on the tour under 21 years of age.
The draws have already been announced, with the players divided into two groups. Group A consists of Gianluigi Quinzi, Hyeon Chung, Denis Shapovalov and Andrey Rublev.

Group B of Karen Khachanov, Borna Coric, Jared Donaldson and Daniil Medvedev. Alexander Zverev, despite being No. 1 single player under 21 years old, will not compete as he will play on the ATP World Tour Finals in London. The first two alternates in case of withdrawal are Frances Tiafoe and Stefanos Tsitsipas.
As far as the new rule changes are concerned, it will be very interesting. The matches will be best-of-five sets, and each set first to four games, instead of six. Tie-break will be played in case of 3-3, while it will be on the receiver’s choice whether there will be an advantage or not in case of 40-40(deuce), so we expect that most of the times there will be no advantage.

In addition, lets on serves are abandoned and the point will be continued, while a shot clock will be introduced to ensure time violations after 25 seconds between points. Only one medical time-out will be allowed and the coaches will be able to communicate with the players. Finally, the public will be allowed to move between points, except from the people sitting behind the baselines.
As we can see, only young blood will participate in this tournament, which can be exciting but also unpredictable, so for the ones who wish to bet bear in mind that the inexperience of the players might cause upsets, as we have seen before that most of the players are capable of the best but also worst outcomes.
The weakest link is Quinzi, as he is No. 306 in the world and took a wild card after winning a qualifier. Coric and Rublev are pretty good players but have shown some instability in previous tournaments, such as the US Open, where more was expected of them. Medvedev’s style is risky aggressive play with some errors, so you never know. Donaldson hasn’t had many good results yet, apart from the quarter final at the Cincinatti Masters. Chung, holder of 8 ATP Challenger Tour titles seems more reliable and the same goes for Khachanov, who is a good bet considering the fact that he reached four quarterfinals and one semifinal in big tournaments in 2017, showing consistency.
The greatest talent of them all though is undoubtedly Denis Shapovalov, who has very special aggressive and defensive shots in his arsenal and can be very spectacular. He is the youngest player ever to reach a Masters 1000 event semi-final in Montreal and was praised by Roger Federer, so we could say he is the favourite. Schedule for the first day will be Khachanov vs. Medvedev, Shapovalov vs. Chung, Coric vs. Donaldson and Rublev vs. Quinzi. Enjoy!