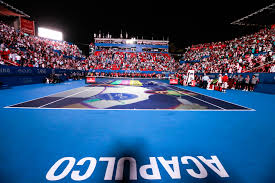 You would be forgiven for thinking this event in Mexico was played on clay. But since 2014, it’s a hard court event. The transition from clay to hard courts is evident in the winners of the event before and after 2014. On clay we had winners like Ferrer (4 times) and Nadal twice (2005, 2013). Ferrer, admittedly, one one of his 4 on hard courts. Since 2014 we see names such as Del Potro, Querrey and Thiem.

The biggest name in the draw this year is Rafa Nadal. He will naturally start as favourite in the absence of Djokovic and Federer. He will meet Mischa Zverev in the 1st round and likely Nick Kyrgios in the next. Also in the same half of the draw are Wawrinka and Isner. Wawrinka is coming off a good run in Rotterdam and Isner showed some good form in Delray Beach. However I still must make Rafa favourite here. On his day, none of these players are a match for Nadal.

Del Potro is back this year and is sure to be popular with the crowds.