1. Isner v Del Potro: Unsuccessful (Unfortunately Isner was never in
this match early on and our target wasn’t hit. But as you can see I
did mention an injury issue to Del Potro. Unlucky for us he didn’t
show it much in the first set. At one point Isner odds hit 300 here!!
Anyone who laid something on Del Potro there would have got some
serious money!) Check out the screenshot sent in by a member (Gian) who profited by laying Del Potro… 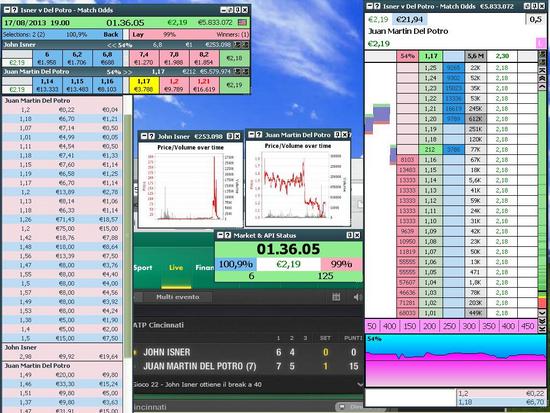 Gian said ‘hi Patrick, recycling green, put into practice, lay Delpo at 1.07 @ back@1.2, great profit without risk. your beautiful article’.
Thanks for sending that in Gian!!

2. Nadal v Berdych: Successful (As predicted Nadal went through in the end)

3. Serena v Li: Successful (After starting poorly, Li stormed back.
Interestingly, even though she lost in 2 sets, at certain points she was serving
for both sets. You can see why I tipped laying Serena! Great
match to watch and definitely good to trade)

4. Jankovic v Azarenka: Successful (The reason I’m making this
successful eventhough Azarenka lost the first set is due to the fact
that she never became a huge underdog at any stage in this match.
Delaying and trading would have got you better odds and since our
targeted range of decimals were quite low, this was easily achievable.
However, at the end of the day you should not have lost money on this
match as I did predict Azarenka winning and your money should have
been on her side)

HIGHLIGHT of the day would easily be Li Na playing well and Azarenka winning!