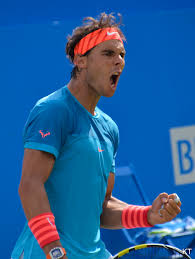 The 1st round of the French Open begins on Sunday, not Monday as usual. We are waiting to see who will come through the last round of qualifiers but the draw has taken place and we can see the potential path for all of the top players.

Where else could we start but with Rafael Nadal who is aiming for his 12th Roland Garros title. Nadal seems to have peaked well after beating Novak Djokovic in the final at the Rome Open, having not won a title on clay in 2019 previous to that. Nadal is trading at evens on the Betfair Exchange and if he maintains his fitness, there are few who can stop him.

I cant help but feel the draw has been somewhat kinder to Nadal. He will begin against a qualifier and his main opponents in his half of the draw are Roger Federer and Stefanos Tsitsipas. Djokovic will have the unenviable task of out-playing Alexander Zverev, Dominic Thiem (runner-up in 2018) and Juan Martin del Potro, who gave Djokovic a great match in Rome and looks to be a threat once again.

Nadal has played 88 times at Roland Garros and has only ever lost twice, losing to Robin Soderling in 2009 and Novak Djokovic in the quarter-finals in 2015. Every other year he’s played, he’s won it all. Potential opponents for Nadal in the early rounds are David Goffin in round 3, Nikoloz Basilashvili, who is in great form on clay, in the last 16. Madvedev or Nishikori are potential quarter final opponents.

Novak Djokovic, the World Number 1, and 2016 Champion, will be Rafa’s biggest threat. Djokovic was the only man to take a set from Nadal in Rome and did so under huge pressure after losing the first set 6-0. Djokovic will face Hubert Hurkacz in the first round which should be no contest. Borna Coric or Denis Shapovalov are likely his last 16 opponents while Zverev will be a big test if he gets to the last 8.

Roger Federer has won the French Open only once, back in 2009. It’s widely accepted that he prefers any other surface and has chosen not to play at the French Open for the past 3 years. He will begin his quest for the title against Lorenzo Sonego. Federer will not have it easy in his quarter of the draw. Tsitsipas, Wawrinka and Cilic will, if the chance arises, will be confident of knocking the Swiss Maestro out of potentially his last French Open.

Dominic Thiem is trading at 9 (8/1) on the Betfair Exchange as the third favourite. Thiem has had a brilliant run in the past 3 years here. Twice a beaten semi-finalist (2016/2017) and beaten in the final by Nadal in 2018. Thiem has won 2 titles this year at Indian Wells and Barcelona. His first major challenge will be Del Potro in the quarter finals if both players make it there. If you’re a trading man, there is value in Thiem’s odds.

A great fortnight of tennis in store, enjoy!