On Day 1 of Wimbledon, I gave a rather bold tip on the match between Melzer and Tsonga. Let’s look at this tip and a happy customer’s (calling him Mr.X) response with a great screenshot to back up this great tip!

Our tip on TTL on this match was as follows..

As we can see, Tsonga was a heavy favourite with back odds of around 1.28. My prediction was that this match was going to swing in Melzer’s favour at some stage even if Tsonga won the first set comfortably. This is exactly what unfolded!

Let’s look at the following screenshot sent to me by Mr.X… 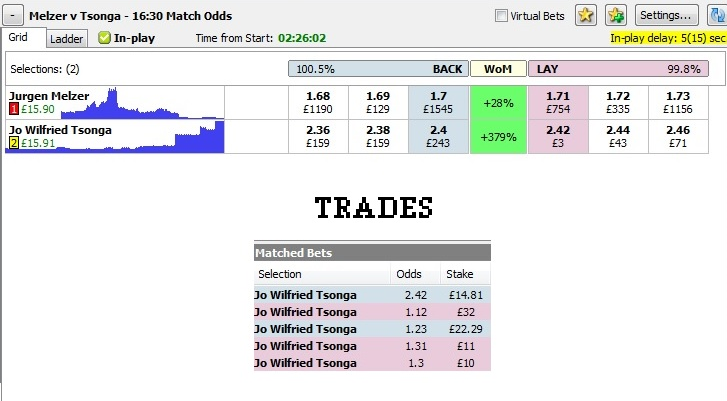 To simplify the above screenshot, let’s check out these trades one by one. We start from the bottom….

The lay stake here is 22 units which has a liability of 6.6 units.

What followed in the match was that Tsonga, even though having given a break point in the very first game, looked very confident in Melzer’s opening service game. The odds on him reduced slightly so Mr.X decided to exit the market completely by backing him at a lower price of 1.23 as follows:

This gives him a small loss as essentially, he has backed Tsonga at a lower odds than his lay price. However, the loss is rather minimal here (around 1.2 units if equated on both sides).

So now, what does Mr.X do next. He waits out the entire set.

At one point in the match, Tsonga odds went from 1.29 in the beginning to 1.06 after the first set was over. So basically he was an overwhelming favourite. Now, after Melzer holds his first game (a rather long one) in the second set, he decides to see how Melzer returns. As soon as he sees an opening he jumps on and gets a lay price of around 1.12 and lays for 32 units.

From this moment on, Melzer races to a 5-0 lead and wins the 2nd and 3rd sets. Tsonga odds meanwhile have jumped to around 2.4 at this stage where he decides to trade out the market completely, as we can see from his final trade below:

With his initial small loss deducted from this profit, his final profit comes to around 16 units approximately.

In my stats for this particular match I have only given a +7.6 unit profit. But in reality, the profits for such a tip could be far far higher. For example, if you had chose to wait out the entire first set and decided to lay @1.06 on Tsonga (something my TIP asks you to do), following would have been the result!

That’s right!! If you had happened to lay for around 167 units, your liability would have been just 10 units (our normal stake). Our profit here would have been a gigantic 94 units approximately.

For me, the most important part of Mr.X’s trading is the waiting part. He decides to quit the trading when he feels uncomfortable during the first set, but jumps back in when he sees an opportunity early in the 2nd. This is what real sports trading is all about.

I hope this testimony from a member (thanks for sharing again Mr.X!) has put some real thought into your trading. If you are going to beat markets, this is really how you do it lads and lassies!

I leave the following note from Mr.X as part of his thanks..

As always, thanks for reading and feel free to comment…