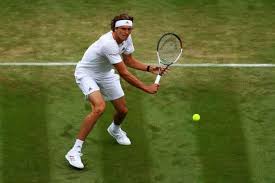 After a few weeks on clay, we preview ATP Stuttgart as the grass season resumes. The grass season is relatively short. It will run for only 6 weeks, starting today in Nottingham, Hertogenbosch, and Stuttgart, and ending in Newport on 21st July. Wimbledon will run for two weeks from 1st to 14th July.

Alexander Zverev and Karen Khachanov lead the field here in Stuttgart, but we also have other top 20 players in Kyrgios, Monfils and Medvedev.

Zverev seems to be hitting some form right now. He had a good run in Paris reaching the quarter finals where he was (unsurprisingly) beaten by Novak Djokovic. Zverev won the tournament in Geneva previous to Paris and will be confident in his ability to adjust to the grass quickly. He has decent pedigree on grass for such a young player, reaching the final at Halle twice and 4th round at Wimbledon. Zverev’s biggest obstacles in Stuttgart include Auger-Aliassime and Giles Simon. I expect Zverev to reach the quarter final but his opponent is hard to predict. My best prediction would be Auger-Aliassime, with Zverev reaching the semi-final comfortably.

Milos Raonic serve is a big factor on grass courts but he’s returning from a lengthy injury so I don’t expect him to go far in Stuttgart. He could meet Tsonga or M. Zverev in the second round. Tsonga, or an in-form Zverev, will give Raonic a good run for his money. One other potential match of note in this quarter is likely to be Basilashvili v Fucsovics, if Fucsovics gets past Munar in the first round. Tsonga to prevail in this quarter to reach the semi finals.

Third seed Medvedev had an explosive start to the clay court season but finished it with a first round defeat in Paris, also suffering the same fate in Madrid and Barcelona. Certainly capable of a good game on grass, he will need to build confidence quickly to challenge in Stuttgart. He is likely to meet Lukas Pouille in the second round who hasn’t impressed me at all since the Australian Open way back in January.

Denis Shapovalov will have a rematch against Jan-Lennard Struff who knocked him out in the first round at Roland Garros. The winner of that match will likely meet Philipp Kohlschreiber, who seems to up his game on the grass.

Medvedev to win this quarter.

The big question in this quarter is can Khachanov bring his form onto the grass. He will have to because he could face Kyrgios early on. Last year, he definitely had the game to beat Kyrgios, but his 2019 season has not gone to plan. Saying that, he should gain confidence from his Paris run but Kyrgios will be tough to beat.

Gael Monfils is likely to be a semi finalist in Stuttgart if he overcomes a quarter against Khachanov or Kyrgios. This quarter is a bit of a minefield and whomever wins it out will be in with a tremendous chance of lifting the trophy.